1Jesus called his twelve disciples to him and gave them authority to drive out impure spirits and to heal every disease and sickness. 2These are the names of the twelve apostles: first, Simon (who is called Peter) and his brother Andrew; James son of Zebedee, and his brother John; 3Philip and Bartholomew; Thomas and Matthew the tax collector; James son of Alphaeus, and Thaddaeus; 4Simon the Zealot and Judas Iscariot, who betrayed him. 5These twelve Jesus sent out with the following instructions: "Do not go among the Gentiles or enter any town of the Samaritans. 6Go rather to the lost sheep of Israel. 7As you go, proclaim this message: 'The kingdom of heaven has come near.' 8Heal the sick, raise the dead, cleanse those who have leprosy, drive out demons. Freely you have received; freely give. 9"Do not get any gold or silver or copper to take with you in your belts- 10no bag for the journey or extra shirt or sandals or a staff, for the worker is worth his keep. 11Whatever town or village you enter, search there for some worthy person and stay at their house until you leave. 12As you enter the home, give it your greeting. 13If the home is deserving, let your peace rest on it; if it is not, let your peace return to you. 14If anyone will not welcome you or listen to your words, leave that home or town and shake the dust off your feet. 15Truly I tell you, it will be more bearable for Sodom and Gomorrah on the day of judgment than for that town. 16"I am sending you out like sheep among wolves. Therefore be as shrewd as snakes and as innocent as doves. 17Be on your guard; you will be handed over to the local councils and be flogged in the synagogues. 18On my account you will be brought before governors and kings as witnesses to them and to the Gentiles. 19But when they arrest you, do not worry about what to say or how to say it. At that time you will be given what to say, 20for it will not be you speaking, but the Spirit of your Father speaking through you. 21"Brother will betray brother to death, and a father his child; children will rebel against their parents and have them put to death. 22You will be hated by everyone because of me, but the one who stands firm to the end will be saved. 23When you are persecuted in one place, flee to another. Truly I tell you, you will not finish going through the towns of Israel before the Son of Man comes. 24"The student is not above the teacher, nor a servant above his master. 25It is enough for students to be like their teachers, and servants like their masters. If the head of the house has been called Beelzebul, how much more the members of his household! 26"So do not be afraid of them, for there is nothing concealed that will not be disclosed, or hidden that will not be made known. 27What I tell you in the dark, speak in the daylight; what is whispered in your ear, proclaim from the roofs. 28Do not be afraid of those who kill the body but cannot kill the soul. Rather, be afraid of the One who can destroy both soul and body in hell. 29Are not two sparrows sold for a penny? Yet not one of them will fall to the ground outside your Father's care. 30And even the very hairs of your head are all numbered. 31So don't be afraid; you are worth more than many sparrows. 32"Whoever acknowledges me before others, I will also acknowledge before my Father in heaven. 33But whoever disowns me before others, I will disown before my Father in heaven. 34"Do not suppose that I have come to bring peace to the earth. I did not come to bring peace, but a sword. 35For I have come to turn "'a man against his father, a daughter against her mother, a daughter-in-law against her mother-in-law- 36a man's enemies will be the members of his own household.' 37"Anyone who loves their father or mother more than me is not worthy of me; anyone who loves their son or daughter more than me is not worthy of me. 38Whoever does not take up their cross and follow me is not worthy of me. 39Whoever finds their life will lose it, and whoever loses their life for my sake will find it. 40"Anyone who welcomes you welcomes me, and anyone who welcomes me welcomes the one who sent me. 41Whoever welcomes a prophet as a prophet will receive a prophet's reward, and whoever welcomes a righteous person as a righteous person will receive a righteous person's reward. 42And if anyone gives even a cup of cold water to one of these little ones who is my disciple, truly I tell you, that person will certainly not lose their reward." (Matthew 10:1-32)

This, the second major discourse of Matthew’s Gospel (Mt 10:1–42), is often referred to as the “Missionary Discourse.” It contains instructions from Jesus to his Twelve Apostles. The special focus of the current passage sets forth some of the difficulties the apostles can expect to encounter in their missionary endeavors.

1) Divisions and sufferings. Jesus warns his apostles that the kind of commitment required for a person to follow him can easily lead to divisions that reach even into one’s family members. Suffering is also part of the life of an apostle. Thus, an apostle of Jesus must be willing to “take up the cross” and follow him. This reference to “taking up the cross” implies embracing cruel and often unjust suffering. Crucifixion was a harsh punishment that was in existence at least 300 years before the time of Jesus. Of course, there is also a connection here to the way Jesus himself suffered and died. Real life is following Jesus authentically. This might cost one his or her physical life, but it will lead to a greater life than the one lost.

2) The grace of receiving. Many Theologians think that the reference to receiving Jesus as being equal to receiving God who sent him is the key point of this whole passage. Certainly, it is the Christological high point. An apostle, by being commissioned by Jesus, carries with him a presence of Jesus. Jesus is the earthly revelation of God. Therefore, to receive an apostle is, in effect, receiving God made manifest in and through Jesus. This interrelationship between apostle, Jesus, and God is sometimes referred to as “divine mutuality.” It is a favorite theme in John’s Gospel.

3) Rewards. Matthew clearly believes that God bestows rewards on those who believe the Gospel message and put it into practice. The final section of today’s Gospel combines receiving with rewards. There is no logical connection between a prophet, a righteous person, and one in need of a cup of cold water. These describe activities carried out by the apostles. The cost of being called by Jesus, and of being sent by him to engage in apostolic activity, is high. While it will involve suffering and divisions, it will also reap great rewards for the apostles.

We are called by the Lord to do great things in our lives. Let us resolve to follow Jesus no matter the personal cost. While we will have sufferings and persecutions Jesus will always be with us to loving guide us. Let us build our faith by studying Holy Scriptures, prayer and receiving the Eucharist most of all. If we remain faithful, we will become like the master of our souls and spread the gospel.

Posted by Confraternity of Penitents at 5:25 PM 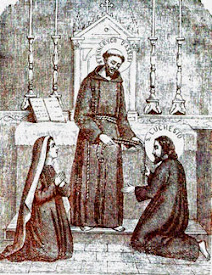